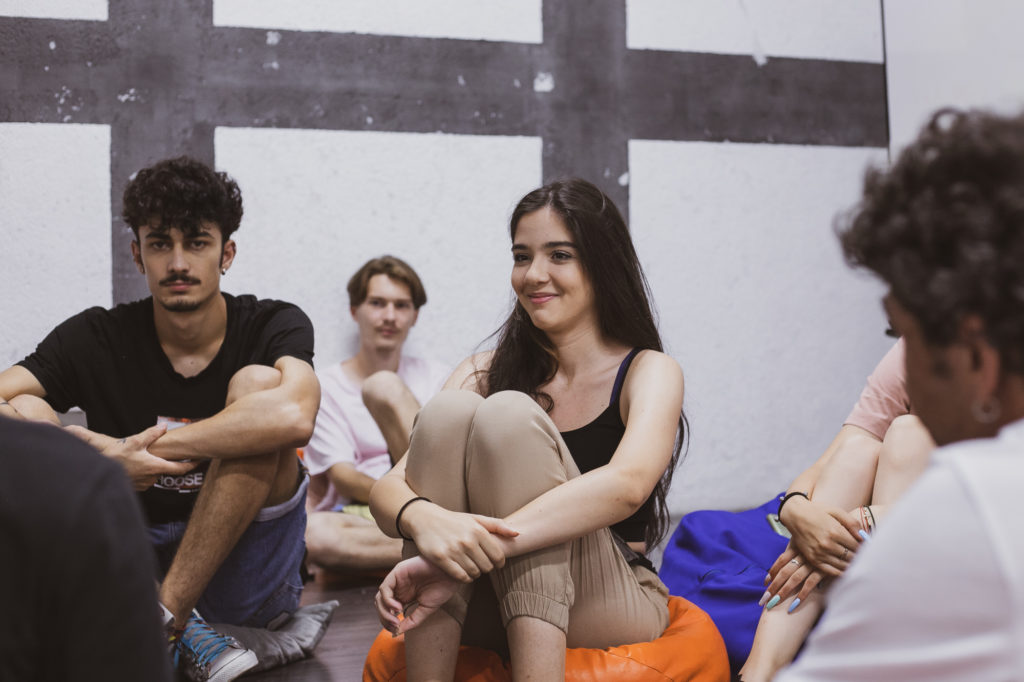 This Saturday we gathered at Ferentari Studios to celebrate a new beginning, namely the launch of a project that addresses the lack of access to education, culture and professional development opportunities for disadvantaged youth in the Ferentari neighbourhood.

We played music, danced, ate pizza and played bartenders inventing (sophisticated?) juice cocktail recipes. But most importantly, we put the country to rights. We talked about what we’re actually going to do in this project, what expectations we have of ourselves and of those we’ll collaborate with – artists, mentors, activists and so on.

The kids* are very excited because they know that 28 of them will learn set design, music composition, acting, choreography, playwriting, directing and photography. Because they know that 14 of them will be engaged in the project to produce two theatre performances and 21 related cultural products, which they will also launch. And people will sit back to watch them and marvel at the good things that can happen when culture is seen as a necessity, as a springboard to development and fulfilment.

But what is culture really?
Because we’re ambitious of sorts, we’ve tried to define culture. Each according to our possibilities and beliefs. We heard many answers, none less valid than the other. But we were most moved by Ionuț Oprea’s answer (artistic coordinator), because he summed up pretty much everything that was said and everything that hadn’t been said. We reproduce here a fragment to remain written and perhaps give food for thought:

“Culture is all that we transmit to each other unneeded. I like this definition because it is inclusive. It means that culture is not just what I like or what suits me, it doesn’t take into account my taste, class, race, religion or human quality. That it can be for me, and for Sami, and for Ion Țiriac. Everyone has access to culture, maybe not to what we would like culture to mean. Tik-tok and Instagram are cultural spaces, just like the Ion Caramitru hall or the Palace hall.

The myth of the poor child, full of A’s and awards, learning quietly, necessarily quietly, by candlelight. Is there such a thing as the generic child that is always talked about? Doesn’t this generic child actually serve as an excuse for the public policies of the past? Well, if that one can, look, against all odds, why can’t others? Our system works, people are maladjusted.

Even though it sounds like I’m talking about education, I assure you I’m talking about culture. We are part of a culture where power is always right, even when it is wrong, a culture where it is preferable to put band-aids on instead of treating the causes of symptoms, a culture where we talk about welfare stinkers and parasites, not poverty, about alcoholics, not alcohol addicts, about drug dealers and junkies, not dangerous addicts, about whores or prostitutes, not girls and women, victims of human trafficking, about effects, not causes. And this is still culture, which comes directly from up there to the populace and produces cultural acts as such.”

In this project we firmly believe that education is not separate from culture, nor culture from education. That the role of the state is to address effectively and sustainably any educational or cultural initiative dedicated to the masses, we believe in coherent public policies, not in one-off band-aids.

We hope that Ferentari Studios will not be just a band-aid.

*Snacker, snuffer – noun of any gender
They are those children and young people whom the formal system has let down and left behind. Those children who struggle to make something of themselves and struggle with a system that constantly abandons them. Those children who need projects like the Ferentari Studios to keep them off the streets, from begging, from being in foster care, or with a needle in their veins.

**
Ferentari Studios is a project funded by EEA Grants 2014 – 2021 under the RO-CULTURA Programme.

The EEA grants represent the contribution of Iceland, the Principality of Liechtenstein and the Kingdom of Norway to reducing economic and social disparities in the European Economic Area and strengthening bilateral relations with the 15 beneficiary countries in Eastern and Southern Europe and the Baltic States. These funding mechanisms are established on the basis of the Agreement on the European Economic Area, which brings together the EU Member States and Iceland, Liechtenstein and Norway as equal partners in the internal market. In total, the three countries contributed €3.3 billion between 1994 and 2014 and €1.55 billion for the 2014-2021 funding period.
More details are available at: www.eeagrants.org and www.eeagrants.ro.
The RO-CULTURA programme is implemented by the Ministry of Culture through the Project Management Unit and has the overall objective of strengthening economic and social development through cultural cooperation, cultural entrepreneurship and cultural heritage management. The budget of the Programme is approximately 34 million euro.
More details are available on the official website: www.ro-cultura.ro.